It’s coming up to my favourite time of year again… Christmas!! Sorry if it’s still too early for some of you but it’s never too early for me! I adore Christmas and one of my favourite things about the Christmas season is… ADVENT CALENDARS! I absolutely love them, and as well as having a bog standard cheapy chocolate one every year; I also always get at least one “novelty” calendar too.

I did a post about some of my faves I had seen last year so I thought I’d do it again this year, but this time I am going to do more than one post as there are just so many awesome ones to show you! This post is going to be showing you some awesome Disney themed calendars that are available this year so keep reading!

This one is exclusive to Shop Disney (aka. The Disney Store) and is currently up for pre-order on their website, but will also be available in store later on too. They did an Animator’s Collection Calendar last year but I like the look of this one more because it looks like they have given it more of a “Christmassy” theme this time. Last year, many of the figures inside were figures already available in the little house playsets they do, but this year it looks like they have at least added a Santa hat or something to the characters to make them more “Christmassy”. It won’t be an actual character behind each door, sometimes it will be an object to go with one of the characters, but the ratio of characters to objects seemed pretty good in the calendar last year so hopefully this one will be the same. I think the price is fairly reasonable for £25.

Again, this is exclusive to Shop Disney. This will be the third year that they have done a Tsum Tsum advent calendar now (and sadly will be the last as they are discontinuing Tsum Tsums next year), and this year they have gone back to the mini size again which has been much celebrated by Tsum Tsum collectors! Last year it was the micro sized ones and lets just say, they weren’t as popular; people definitely prefer the mini’s! Anyway, it’s a different mini sized Tsum Tsum behind each door (25 in total as this one goes right up to Christmas Day!) and they will all be dressed in Christmas related outfits. There has been quite a bit of excitement with this calendar as it’s going to feature some sought after characters that haven’t been seen as Tsum Tsums before! It’s £80 which seems eye watering at first, but I suppose when you work it out, it’s £3.20 per Tsum Tsum so it’s not *too* bad (although they do normally retail individually for £3 each so I guess the extra 20p you are paying for each one is to account for the theming and the actual advent box). If it had some Pixar characters in it, I could have been tempted to get it; but sadly our Pixar pals have been left out again 😪

Another exclusive to ShopDisney, this pin advent calendar will feature 24 bauble shaped pins that you can hang on the Christmas tree that folds out to build from the box. When I first saw the sneak peeks of this calendar, I was so excited, but in all honesty, I’m pretty disappointed from what we have seen of it so far. It’s a nice idea, but the pins don’t look the usual high quality of Disney pins to me. Now, it could just be that they don’t look great in photos and are in fact much better in real life, but from what I have seen so far, they just don’t look as impressive as I had hoped for. It’s also a whopping £149, which again, when you break it down, works out at just over £6 a pin so maybe it’s not *too* bad when you look at it like that; but for me personally, it just seems too much from the looks of the quality of the pins. There has also been no confirmation yet as to whether the pins will be tradeable at Disney Parks. In theory you should think they would be since they are calling it a Disneyland Paris Pin Advent Calendar, but I just have a feeling they won’t be which for me, would devalue it even more. The only ones I have seen sneak peeks of so far are a Stitch Pin and a Piglet Pin so I’m guessing it’s going to be all classic Disney characters, no Pixar or anything like that. It’s a shame, as I was really excited about potentially getting this but it’s just too expensive for me. I will enjoy seeing other people’s pictures of it though, if I find anyone on Instagram that has bought one.

This calendar is actually empty, it’s one you fill yourself; but it’s Disney and it’s adorable so I’m going to include it. Also, it would be perfect for using to make your own alternative to the super expensive pin advent calendar! It’s again from Shop Disney, but what I’m seriously contemplating is getting this instead, and buying bundles of pins to put inside to make my own pin advent calendar. The calendar is £15, but you can often get really great priced bundles of Disney pins on eBay or Facebook selling groups so even after spending £15 on this and then having to buy 25 pins to put inside yourself, you could still do it much more cheaply 😉 Of course, you could put other things inside too like sweets or chocolate or other tiny treasures (or even some up-cycled badges made from old books from @lucysroomshop on insta 😉); plus you can re-use it year after year! The design on it is super adorable too!

This calendar looks so cool because behind each door are actually the parts for building your own model of Lightning McQueen at the end when you’ve opened all the doors! I love crafty things so this just really appeals to me! I’m slightly confused as it says 24 Days of Fun on the box but the description on Amazon says there are 19 model pieces, but perhaps there are some other things on the rest of the days 🤔 Its on Amazon for £31.99 currently but I’ve had it saved in my basket for a while now and the price sometimes goes down so it’s worth keeping an eye on. If Lightning McQueen isn’t your thing, keep reading on…

Same concept as the Lightning McQueen calendar above, but this one is to build the Millennium Falcon from Star Wars! How cool is that? My nephew (and my brother, his Dad) would absolutely love this! The models just look so cool and detailed, and it looks like they click together fairly easily so should be fun for younger kids to do as well. It’s currently £28.95 in Amazon but again, the price can go up and down so you might want to keep your eye on it in case it goes a bit cheaper at some point. 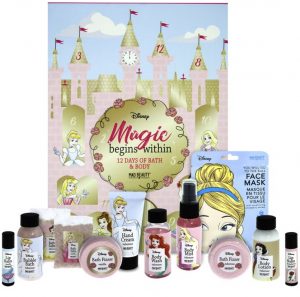 Mad Beauty have gone a bit nuts with Disney advent calendars this year with several different ones available. First up is this Disney Princess one which comes with 12 Disney Princess inspired bath and beauty products, such as a face mask, bath fizzers, body wash etc. It’s currently available in Boots for £16 and is included in their infamous Christmas 3 for 2 mix and match offer. I would have loved to have got this but unfortunately for me there are just too many products in it that require use of a bath and we don’t have one (I have an adapted shower wet room as I can’t have baths). If you can have baths though, it looks super cute and there are some nice looking products inside, each in Disney Princess themed packaging.

Next up from the Mad Beauty advent calendars is this Snow White one, exclusive to Superdrug. It’s normally £14 but is actually on offer at the moment for half price which is pretty good! Again, it has 12 bath and beauty related items in it, each in Snow White themed packaging etc. I quite like the look of this one as it’s not all actual products, there are some other things like nail files and a body puff inside too. The products are also apple scented which sounds lovely as well. Again, a few of the items inside require the use of a bath which is no good for me, but whilst it’s on offer for £7, I’m tempted to grab one and I can always give the bath items to someone else to use.

If Disney Princesses or Snow White aren’t your thing, don’t worry because Mad Beauty have got you covered with this Mickey Mouse version instead! Also exclusive to Superdrug, it’s on offer for £7 instead of £14 at the moment! Like the Snow White one, as well as having products in, it also has nail fails and a body puff etc. The products in this one are vanilla scented and of course, in Mickey themed packaging.

I have saved this calendar to last as this is the one I am actually most excited about! Last Christmas, I found a vintage Disney Storybook advent calendar in a charity shop which came with miniature Disney books that you could then hang on your tree. I posted one each day on my Instagram account and it was just so much fun! So when I spotted this new version on Amazon, I knew I needed it and I pre-ordered it straight away! I don’t know yet how these ones will compare size wise, or if they come with loops to hang on the tree, but I am still super excited as I love books and I love the idea of a new little story each day. It also includes Pixar characters so that makes it even better to me! It’s not released until 6th November but you can pre-order it on Amazon for £20.83 at the moment, with best price guarantee too (so if it goes cheaper after you have pre-ordered, you will pay the cheaper price, but you won’t pay more if it the price increases).

Keep checking back soon for a post about some other non-Disney but still totally awesome advent calendars soon!

You may also enjoy: